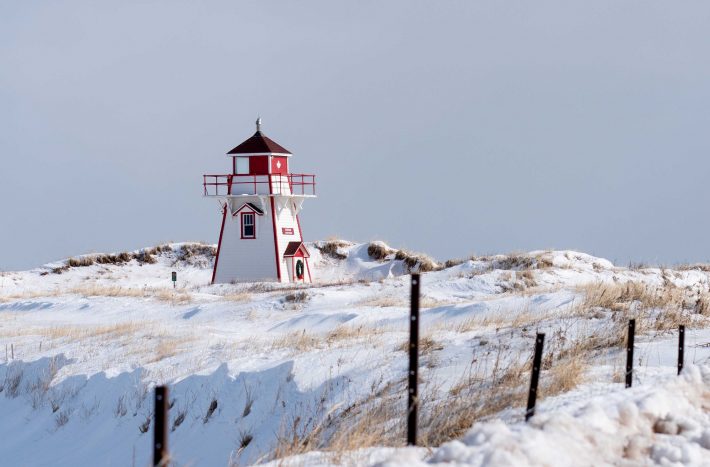 What made you want to take a trip to the Maritimes in the winter months?

I was in PEI emceeing a few events for work. As this was my first visit to the island, I decided to extend my stay for 9 days and travel around the province as well as pop into New Brunswick and Nova Scotia. Since it was during the winter months, many places were closed. But we managed to make the most of it and stopped in at several great locations. Where did you visit?


We spent a few days in Charlottetown (where my conferences were) and spent a couple days travelling around the island. We headed up to PEI National Park and Brackley Beach, drove past Cavendish hoping to spot the Anne of Green Gables House and took in the sunset all the way up to the North Cape. We drove through Skinners Pond on the way back and, of course as a farming family, we had to stop for a photo with the potato statue at the Canadian Potato Museum in O’Leary. We enjoyed the views at both Point Prim Lighthouse and the flow of ice passing by the East Point Lighthouse. We were delighted to spontaneously stop in at Hannah’s Bottle Village as well for a snowy tour of the 27,000 bottles turned into a village of buildings.

Next, we drove into Nova Scotia for a night to trace my family’s roots at Pier 21 in Halifax. We were able to track where my grandfather came into Canada in 1921 as well as trace the history of several other relatives on both sides of my family. We also stopped in at Joggins Fossil Cliffs. Then we headed into New Brunswick and spent an entire day at Hopewell Rocks and continued on to St. Martin’s Caves, Cape Enrage and the Reversing Falls in Saint John before returning to PEI to fly out. We had a night layover at Niagara Falls on our way back to Saskatchewan. Who did you travel with?

I invited my parents to join me. It was their first time on the east coast so I was excited to show them around.

Where did you stay?

We stayed in a combination of hotels and AirBNBs. We found some really cute spots including a great apartment in Charlottetown. Next time, we’d like to stay in a lighthouse! Where did you eat?

We tried to eat seafood nearly every meal! It was a special treat for us coming from the prairies. In particular we enjoyed meals at Gahan House, Claddagh Oyster House, Olde Dublin Pub and of course a stop (or two) at COWS Ice Cream while in Charlottetown. In Halifax we enjoyed fresh fish at The Old Triangle Alehouse. While in New Brunswick we enjoyed fish and chips at Skipper Jacks in Moncton.

What did you find memorable?

It was quite special to trace our family roots at Pier 21. We also really enjoyed Hopewell Rocks, spending a whole day watching the tide change and returning the next morning for sunrise. We loved seeing the ice flows around PEI and stopping at each lighthouse. It was such a great trip to share with my parents. Any suggestions in what places should someone have on their bucket list? Magnetic Hill in Moncton is a quirky and fun place to visit as well but was closed for the winter when we were there.

To learn more about Ashlyn, check out the links below.