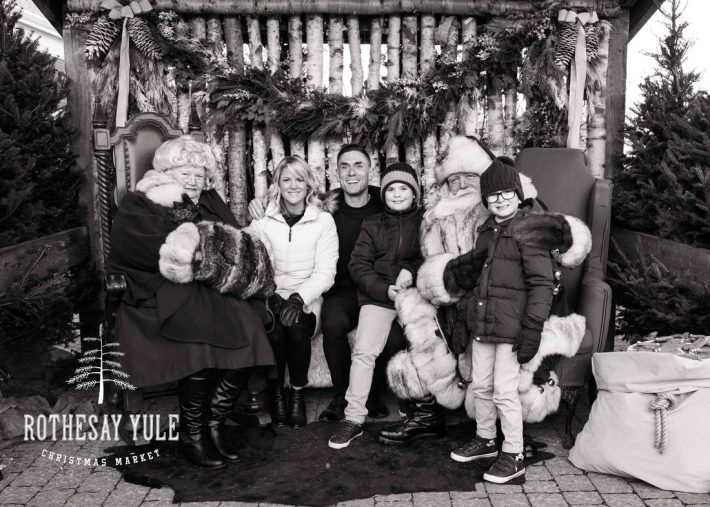 Throughout 2019, we have been highlighting various occupations as part of our Social Media Education Platform, and we will be continuing to do so in 2020 . We are doing this as an effort to bring awareness to grade 11, 12 and college students, so they can think ahead and do research on various career options available.
To date, we have interviewed: a Pharmacist, Radiologic Technologist, Respiratory Therapist, Optometrist, Speech Language Pathologist, Bike Shop Manager, Correctional Officer, Social Worker, 911 Operator, Police Officer, Flight Attendant, Nurse, Teacher, Educational Support Staff, Radiation Therapist, Lifeguard, Firefighter, Music Professional, Paramedic, Engineer, Medical Laboratory Professional, Actor, Non-Profit Organizations, Dental Hygienist, Nurse Practitioner, Flight Dispatcher, and a Marketing professional.​

We discussed the reality of their day to day work and asked them for advice on succeeding in their respective fields. Check out these interviews by visiting our online “Student Career Resource Centre”.

Today we are proud to interview James Mullinger a COMEDIAN. 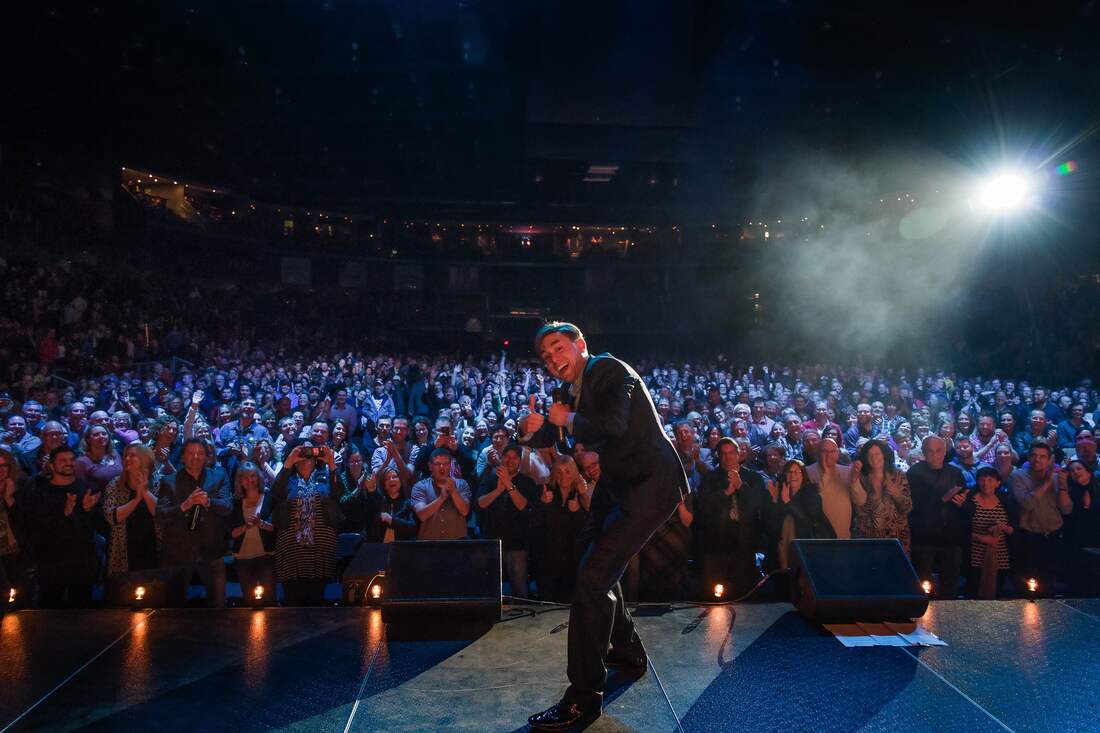 Briefly describe the educational background you need to be a stand up comedian?

Well, I have a university degree in English Literature and Women’s Studies. Both of which inspired me creatively and politically. But the only criteria for a career in stand up comedy is being willing to work extremely hard, grow a very thick skin and be willing to take a lot of humiliation as you learn the ropes.

Why do you love being a stand up comedian?

I love meeting people. I love spending every evening with people who share the same sense of humour as me. And I am incredibly blessed to get to do this job in such a beautiful part of the world as the Maritimes. So many people told me that it wouldn’t be possible to make a living as a comedian here. But I am busier now than I was in England. I perform everywhere from schools and churches to vineyards and hockey arenas. A lot of my work is corporate shows so I can work completely clean which is a great skill for a comedian to have. And I also perform my inspirational and motivational keynote speech Anything Is Possible across North America at conferences, conventions and private corporate events.

What do you feel are the biggest differences/challenges from being a comedian in England and Canada?

The comedy scenes are very different. There isn’t a star system here. Which is both a good and a bad thing. The good news is that the biggest and best comedy festivals in the World are here. The biggest comedy club chain is here. And stand-up comedy has been a regular fixture on prime time TV here for much longer than it has been in England.

But like I say, there’s no star system in Canada to make comedians or actors properly successful in their homeland. The upside of that is that no-one gets in to comedy for the money here. Or for the fame. There is a real passion in the circuit here. There’s no panel shows, no-one is getting rich here. The only people doing comedy in Canada are the people that really love comedy. We love what we do, we work hard and we have made a career out of it. And this was always my dream. [James’ experiences on the Canadian comedy circuit were documented for a primetime CBC documentary that captured his sold out arena show.

You can watch it here:

What are your future aspirations and goals for your career?

Just to maintain where I am at. Which is hard in itself. My dream in life was to become a stand up comedian and to feed and house my family from that job. The fact that I now do that is the greatest thing and I just want everything to carry on exactly as it is now. I’m not chasing anything other than staying happy.

Who/what inspired you to get into stand up comedy?

I have always been fascinated by stand-up comedy. I grew up listening to Steve Martin records and watching Jerry Seinfeld, Eddie Murphy and Robin Williams videos and studied them. Watched them over and over, laughed like a drain and wondered how these people could amble on stage, act so natural and be so skilled at making two thousand people laugh when I was too shy to talk to another kid in my class. In my early twenties I first started thinking about doing stand up and began to really hate myself for not trying. One night, on New Year Eve 2004 I was on holiday in Saint John, New Brunswick with my wife visiting her family and we sat watching a dinner theatre production. These performers had us all laughing and dancing and singing and I was half entertained and half overcome with profound jealousy that these performers were living out their dreams. No matter what they did during the day or what their home lives were like, at night they were stars. In that they were actually doing it. I was jealous and became very angry with myself for not even trying. So I made a pact that night that 2005 would be the year I tried stand up comedy. It still took me five months but in May that year I finally found the confidence to do it. Then I hit the open mic circuit and gigged every night for five years, dying on my arse while doing a fairly high stress and high pressure day job for GQ magazine.

And that’s what The Comedian’s Guide To Survival is about – those years when you have a day job but you are performing on stage every night and it’s a brutal grind but gradually you get better at it. Around 2010 I started to get decent gigs and then started touring solo a couple of years later.

Are they the same reasons you continue to do so today?

I love what I do. Obviously it is very much a job now in that I feed my family doing it but not a day goes by without me realizing how lucky I am. Because there were a thousand times in the early years that I almost gave up.

What are the challenges of the vocation?

There are some but I always promised myself that if I ever made it I would never complain.

What are your thoughts on the current state of Canada’s comedy sector?

It’s tough being a comedian in Canada. You will never be a big star in this country but that’s also nice because it’s not ruthless here. We all know we aren’t going to be rich or famous. We do comedy because we love it, not because we are chasing riches because we know there won’t be any! The national newspapers in Canada will never write about Canadian comedians (unless they go to America) and the government won’t even recognize it as an art form. So we will all just keep doing what we do.

We recently saw you with Santa Claus at the Rothesay Yule, what is one quality that you love about Santa!

Well, he’s a good person obviously. A quality I look for in everyone. Everyone I meet, work with, play with. I like good people. Doesn’t matter what you do, where you come from, age, gender, sexuality – I just like good people. And if you are good people, we will be loyal friends forever.

How do you spend your Christmas?

With my wife and kids and either her family in New Brunswick or my family in England. Or, once in a while, all together! My kids are 6 and 9 right now so it’s a very magical time for them and we really make the most of it. 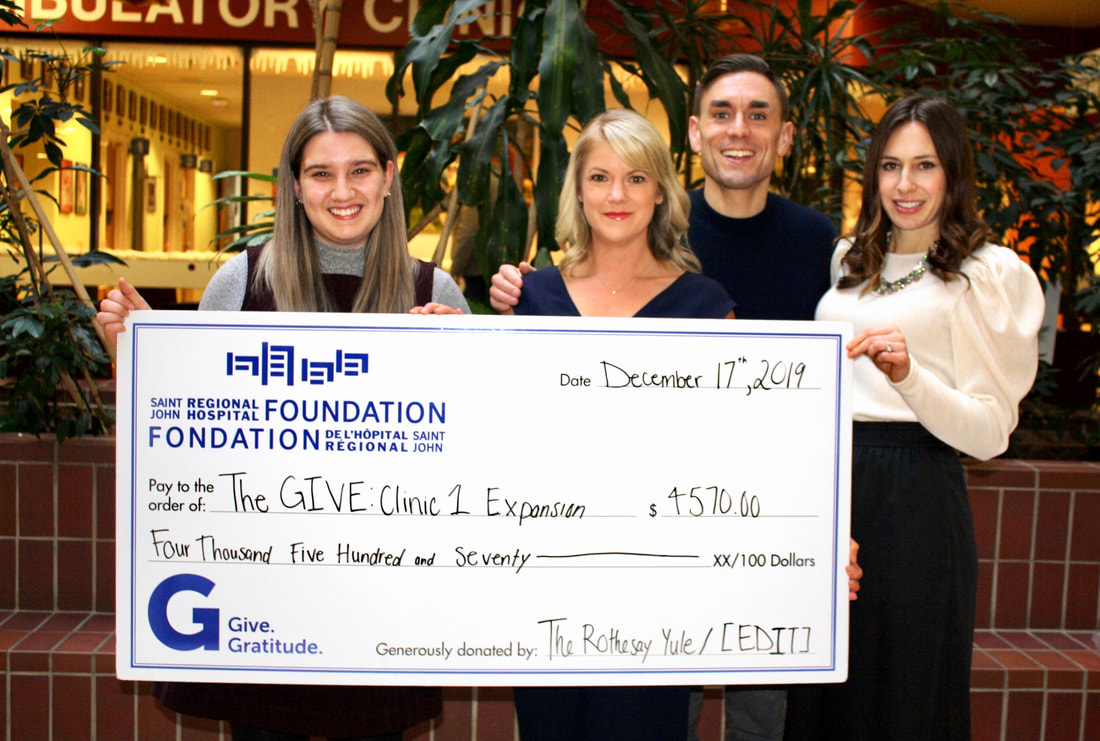 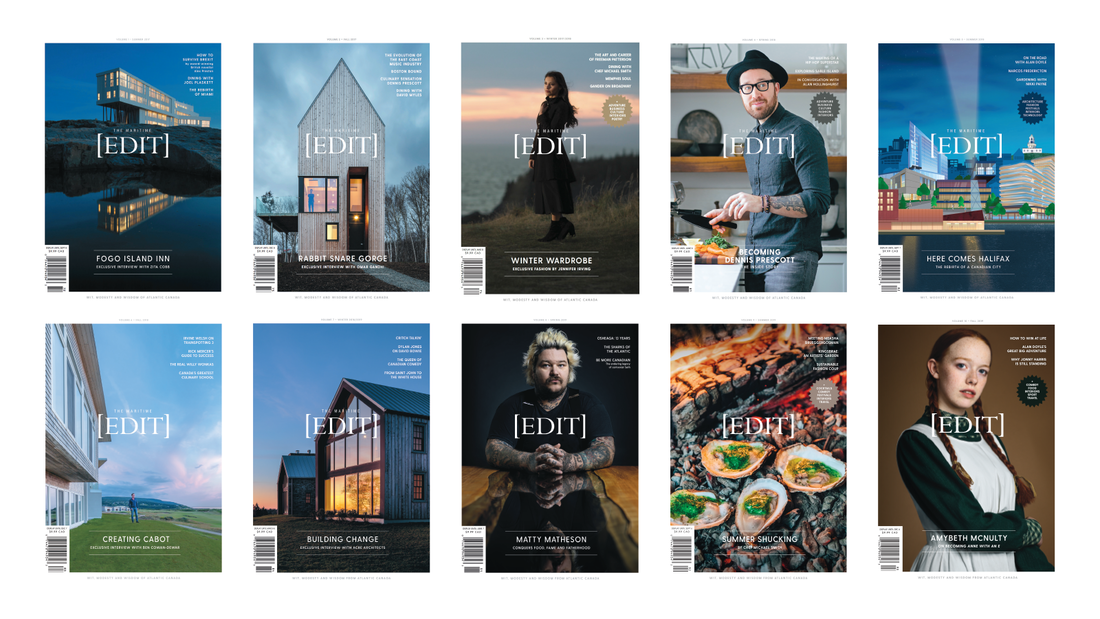 Tell us a little bit about the Maritime EDIT magazine! We truly love this publication!

Thank you very much. My wife and I worked in magazine publishing in London (she for Vanity Fair, Wallpaper* then as the founding publisher of Monocle) and I for GQ. When we moved to New Brunswick in 2014 we identified a gap in the market for a premium, upmarket lifestyle magazine that celebrates the East Coast of Canada and highlights all of the wonderful things that are happening here that are ignored by other mainstream media across Canada.

We are in hundreds of retailers across Canada, see list here: and this is all in addition to our vast distribution on the East Coast. It is a lot of work with a small, but hard working, and loyal team and I am very proud of what we have achieved in just under three years. We are competing nationally but are based out of this small place (Rothesay, New Brunswick) so we are learning as we go. Quality wins out and this is why we now have advertisers coming to us from all over the world, because we are the only way to reach this hard to reach demographic. Last year we won a National Magazine Award for a feature we did on Indigenous musician Jeremy Dutcher, which makes me very proud that the first ever national magazine to be based in New Brunswick is able to compete in this way. We sell a lot of bulk orders of the magazine to conferences and suchlike because it makes for a perfect gift for delegate sand dignitaries. And the gift subscriptions are flying in because companies realise that for the modest investment of $35 a year they can give their clients or loved ones a gift that keeps giving four times a year!

Leave us with a fun fact about your occupation?

I guess that the biggest misnomer about this job is that it’s all one big laugh. I mean, it is – or should be – when you are on stage of course. But I spend more time at my desk writing and doing admin and the business side of it than I ever did when I had an office job.

James Mullinger is a stand-up comedian and editor-in-chief of The Maritime Edit, a quarterly print publication celebrating the wit, modesty and wisdom of Atlantic Canada. Watch his brand new Amazon Prime Video stand up special Almost Canadian now or buy it on Blu Ray and DVD here: www.jamesmullinger.com 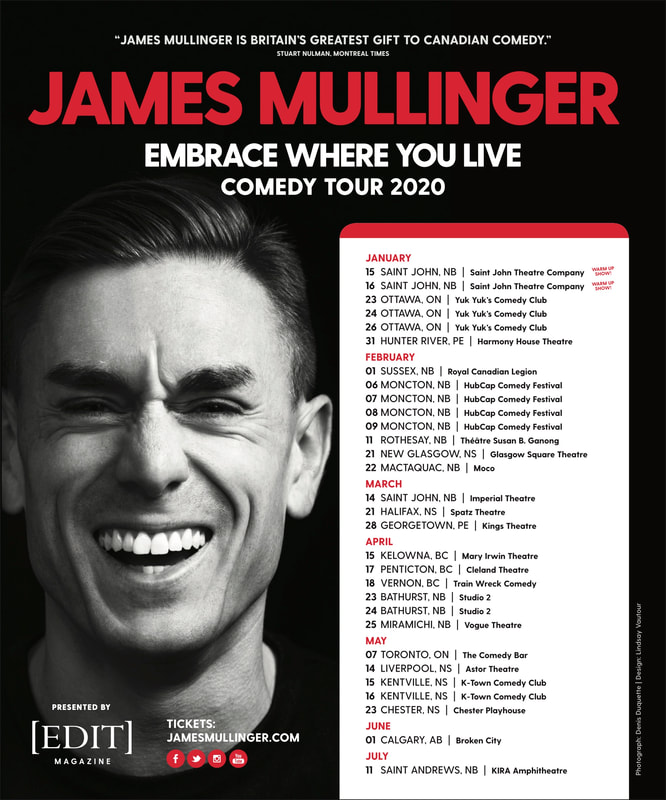