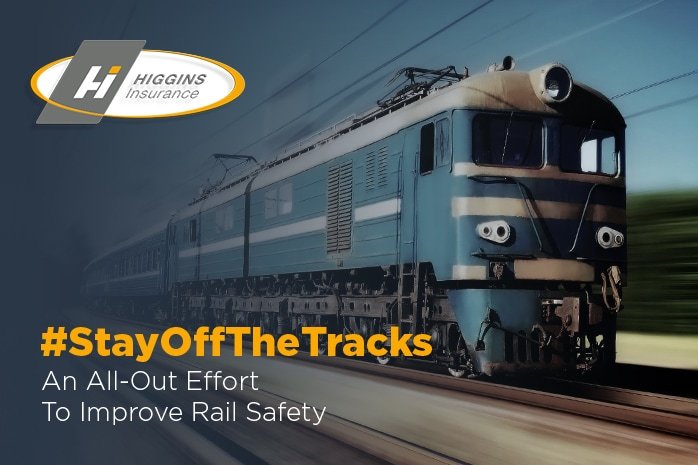 ​At Higgins Insurance, we’re devoted to doing all we can to promote the safety of those in our community. That’s why when someone comes out with a new way to inform citizens of certain dangers or ways to stay safe, we’re completely on board.
Operation Lifesaver was first established in the early 1970s. Their goal: railway safety. They are one of the best sources for information pertaining to rail safety, support, and education.

The week of April 24th is National Rail Safety Week. In honor of this important week, we want to support Operation Lifesaver in their efforts to keep our community safe by staying off the tracks.

National Safety Week, we will be supporting Operation Lifesaver by sharing a video they released last summer, #ShareTheScare. The video shows teens prepping for a fake rail accident. The scene: their car has just been hit by a train. One teen has been thrown from the vehicle; the others remain inside, seriously injured.

Students from local schools attended the event, where EMTs and fire, police, and ambulance vehicles all arrived “on scene.” The event was so realistic that it had a profound effect on the teenagers involved in the film and those who attended. So much so that all there vowed to show more respect for the tracks.

According to CBC News, in 2012 there were 82 fatalities and 72 serious injuries related to rail safety. People on the tracks when they shouldn’t have been have made up a major part of those statistics. Twenty-nine people were killed during crossing accidents, while 49 deaths were the result of trespassing.

Whenever you come across a train crossing area, make sure to proceed with caution. If the crossing bars are coming down, don’t try to make your way across before they come down completely. Don’t think it won’t happen to you. Every person injured or killed in such a scenario believed that it wouldn’t happen to them.

Another important part of rail safety is to avoid trespassing on railway property and walking the tracks. Many people don’t see the danger in doing this. After all, if they hear a train they’ll just jump off the tracks. That sounds logical, but so many things could go seriously wrong with such a scenario. A person could trip and fall, their shoe could get caught, or there might not be anywhere to go if they’re on a narrow stretch or on a bridge.

To help people see the importance of avoiding trespassing and walking on railroad tracks, Operation Lifesaver has put together three public service announcement videos. These videos—with the hashtag #StayOffTheTracks—show young adults walking on the track like there’s no problem. But there is an accident and injuries. The videos show teens distracted by taking selfies, listening to music (this is incredibly dangerous!), and filming on the tracks.

The videos do a good job of showing just how important it is to focus on rail safety by avoiding spending time on the tracks. It’s important to remember that trains are moving at an incredibly fast pace, faster than a human can run. And trains are too big and heavy to stop on a dime. Once the driver sees someone on the track and applies the brake, it is often already too late.

While it’s true that trespassing on railway property is illegal, that’s not the only reason people should stay away from the tracks. The most important reason is because of the danger. It is very real and there is potential not just for serious injury, but for death.

During National Rail Safety Week, we welcome you to share the videos made by Operation Lifesaver to as many people as you can. Share them on social media with the hashtags #StayOffTheTracks and #ShareTheScare.

Those who are most at risk for engaging in risky behavior—like trying to beat the rail crossing arms or listening to music while walking on the tracks—are teens and young adults. Try to show your young loved ones the videos and get them to spread the #StayOffTheTracks and #ShareTheScare message, too.

The more people involved in this effort, the more lives can be saved.

Would you like more information about rail safety? Contact us or Operation Lifesaver for more information. We’re happy to do what we can to help you and your family stay safe!