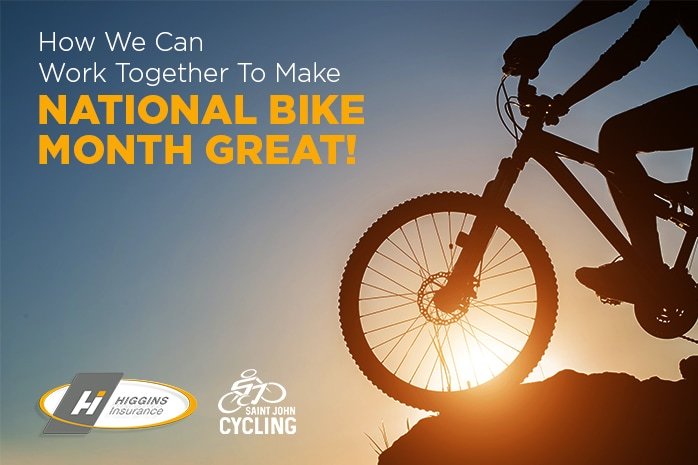 May 29th marks the beginning of National Bike Month. We’re excited to do our part to make this the best bike month ever! We’ve recently become a Carbon Fibre Sponsor for Saint John Cycling. These folks promote a healthy lifestyle and environment through their devotion to their beloved sport.
We want to help them by promoting road safety. Not only does this include bike safety, it also includes making sure drivers keep an eye out for the cyclists they share the road with.

To promote a higher level of safety during National Bike Month, we want to share some statistics and tips to make this the safest, greatest bike month ever.

According to a study by Transport Canada, fatalities involving cyclists fell in Canada by almost forty percent between 1975 and 2005. However, according to a coroner’s report, between 2006 and 2010, almost 130 cyclists were killed. This convinced those in the cycling community and even the Ontario coroner that bike safety is still an issue that needs to be addressed.

Road safety is a team effort between cyclists and motorists. They both need to do their part. Thankfully, there are plenty of simple changes that can be made to make sharing the road a safe experience.

How Cyclists Can Do Their Part to Promote Safe Riding

If you’re a cyclist, what steps can you take during National Bike Safety month and beyond to promote bike safety? According to the study by Transport Canada, one of the biggest causes of traffic accidents involving bicycles was inadequate lighting.

We all know that it can be difficult to see a bike on the road in the first place, but it can be even harder to see them at night. Make sure to wear a helmet light in addition to bright-colored clothing with reflective strips. It’s also important to make sure you have plenty of reflectors on your bike, too.

One of the things that can help improve bike safety is riding in groups. That’s one reason we love Saint John Cycling. Not only does this group encourage one another to keep on biking, they find the best places to ride together. There’s definitely safety in numbers when riding on the road.

Some other safety practices to consider include the following.

All of these practices may seem like common sense, but these are some of the top reasons why bikes are hit by other vehicles.

What Motorists Need to Do to Help Promote Road Safety

Motorists play an important role in road safety, too. According to a report by Road.cc, motorists only see one in five cyclists on the road. And those who don’t see the bikes on the road are more likely to be between the ages of twenty and thirty. This is one reason why we highly recommend biking with a partner or a group.

But there are definitely some things motorists can do to improve those numbers.

What will you be doing to observe National Bike Month? We hope that you will get out on your bike and enjoy a ride every now and then. When you’re out on the roads, just remember to have fun and do your part to promote road safety.

Do you have any suggestions or tips for bike safety? We welcome comments from cyclists and motorists alike. Leave your comments below or comment on our Facebook pagehttps://www.facebook.com/higginsinsurance/.