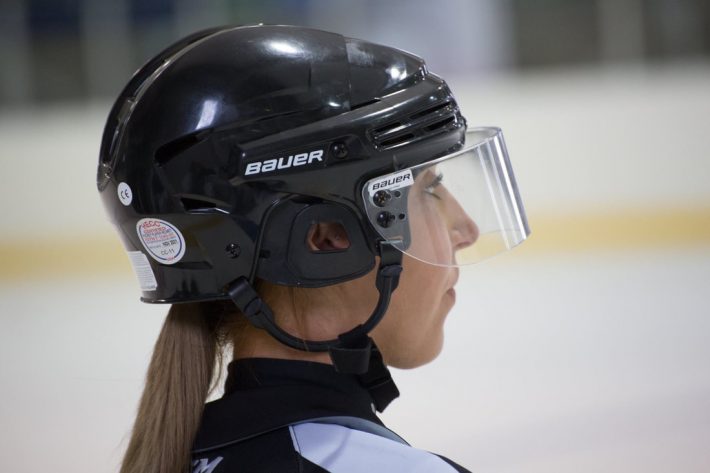 In 2019, we are highlighting certain occupations as part of our Social Media Education Platform. We are doing this help grade 11, 12 and college students so they can think ahead and do research on what they are really getting into.

So far we have interviewed a Correctional Officer, a Social Worker, 911 Operators, Police Officers, Nurses, Teachers, Educational Support Staff, Radiation Therapists, a Lifeguard, a Firefighter, a Musical Professional, Paramedics, Engineers, a Medical Laboratory Professional, a career in Acting, working for Non-profits, Dental Hygienists. We discussed the reality of their day to day work and asked them for advice on succeeding in the field.
If you are currently a student, or a graduate, and looking to get some exercise make some extra money, why not consider becoming a Time Keeper or a Hockey Official.  Check out the lovely introduction from Brandon Bourgeois of Team Stripes.

“Officiating hockey is a great way to give back to the game of hockey, learn valuable skills, and make some money doing it. Whether it’s working youth games on weekend mornings, or chasing the bright lights of the NHL, it can be a very rewarding experience where you will make lifelong friends. If you are interested in getting registered as an official – contact your local minor hockey association, who will put you in touch with your RIC (Referee-in-Chief).

​For a more detailed run-down of the process check out: https://goteamstripes.com/blogs/team-stripes-blog/how-to-become-a-hockey-referee”

Here is our interview with Victoria Jane Luke, a female hockey referee in the UK. What brought you to wanting to become an ice hockey referee?

I was volunteering at the 2015 IIHF Women’s World Championship Division II in Dumfries and was a driver for the officials. I was fairly new to the sport, so wasn’t very confident in my rules knowledge but a few of the girls who were allocated to referee the tournament were encouraging and made it look fun. I hadn’t seen a woman official on the ice before this tournament. I ended up booking and going on a referee’s camp that summer.

As a female referee in the UK what challenges do you face?

Officiating is developing in the UK, we have had new training implemented last season and merged the English and Scottish officials.

Female officials are still the minority, particularly in Scotland. I find that on the ice most of the players have a lot more respect for a female referee and it seems to be easier being a female to calm tensions. I think most of the challenges are off the ice, people often judge on appearances and I often get asked how I would separate a fight. I’d love to see more opportunities for women to develop and work on senior league games.

What advice would you give young ladies who aspire to follow in the footsteps, such as yours, in becoming a referee?

I love being on the ice, and being part of team stripes is great fun. If you are a player it gives you a better understanding of the game and respect for the officials . I’d encourage anyone thinking about it to do it. Since I started refereeing four seasons ago I’ve had the opportunity to travel to Sweden & Finland, I’ve made new lifelong friends in the ice hockey community. It’s the best seat in the house, you can hear the player chirps, feel the hits and it’s a great atmosphere.