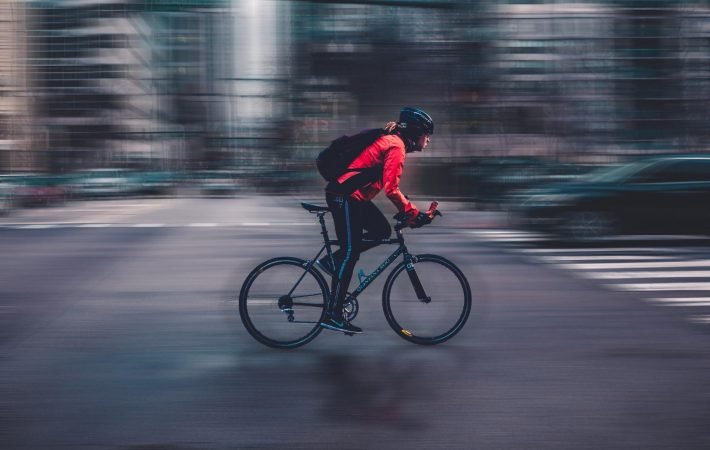 May is National Bike Month –  Bike Month 2019 kicks off on Monday, May 27 and continues until the end of June, with hundreds of ways to celebrate across Canada.  National Bike Month is a chance to showcase the many benefits of cycling and encourage more folks to give it a try. Our goal at Higgins Insurance during bike month is to create awareness about safety.  Cyclists face the same hazards as vehicles. Other cyclists, pedestrians, falling objects, vehicles, animals, road construction, road conditions, weather etc are examples of these hazards.

To highlight National Bike Month we have interviewed 3 cyclists in the community; Sophie Burry, an upcoming Mountain Bike Rider,   Shelley Wood who cycled across Canada to raise awareness and money for childrens’ cancer and Wayne Arrowsmith who was instrumental in getting the One Meter Law passed in New Brunswick. Here is our interview with Sophie Burry!  Thank you.

How did you get into racing mountain bikes?

There are no sidewalks where we live but there is a dirt road that I started riding as soon as my training wheels came off. Once I started biking off road it was just the thing to do and I enjoyed it.

Do you have a mentor?

I look up to Catherine Pendrel from McAdam NB. She has been to the Olympics twice.

Do you have plans for the 2019 mountain bike season?

Yes I do, I will be travelling around NB with my family going to all the races I can. I hope to be the Under 13 NB champion this year. I am also going to race in my first Canada Cup race in Kentville NS in August. I also look forward to just riding with my friends as much as I can.

What can course organizers do to ensure the safety of participants and spectators in any Mountain Bike events?
​
In the bigger events on TV you see the spectators getting very close to the riders and that doesn’t seem very safe, but I have not experienced that myself. Most people at races are very supportive and want the best for everyone. That is the great thing about mountain biking, everyone is always supportive and looking out for everyone else. Here is our interview with Shelley Wood!  Thank You

How did you get Involved in Cycling?

I had been teaching spin classes at the YMCA in Fredericton, when one of the other instructors suggested I should try riding outside 🙂 I bought my first road bike in 2007 and haven’t stopped riding outside since!

Does your family ride bikes? (Spouse)?

Yes – our whole family loves to ride bikes! I actually met my husband thanks to cycling (we met in spin class!) – he has been a great training partner for some of my triathlon and cross-Canada adventures.  His three boys also love to ride – and they’ve even done some triathlons! It’s a great way to spend time together as a family.

What made you decide to cycle across Canada for the National Cancer Ride? Where did your inspiration come from?

My friend Monique (who I met in one of my spin classes – let’s just say a lot of great things in my life started because of spin classes) – did the National Kids Cancer Ride in 2009, which I thought was pretty amazing.  In 2012, I started to look for a challenging event that would also raise money for an important cause – I was looking for something to get out of my comfort zone, but also something that would make a difference.  After looking into a few marathons and other events, I remembered the national ride. The biggest selling point for me was that every dollar I raised would go directly to help kids and their families – not a penny would be directed to administration, or other fees (we pay our registration fees and travel fees, for instance).  So I signed up in 2012 for my first national ride – and this event has been a big part of my life ever since. This fall, I’ll be taking part in my fifth National Kids Cancer Ride.  The inspiration comes from the kids and families I’ve met along the way – many of the people on the ride (cyclists and volunteers) are parents who’ve been through a childhood cancer diagnosis, and a few of the riders are survivors of childhood cancer. It’s hard not to be inspired – the toughest day on a bike is nothing compared to what some of these kids endure in treatment.  I think of these events as gratitude accelerators (they’ve had a pretty profound impact on my outlook in life!).  Over the last 15 years, the foundation has raised and distributed more than $50 million to childhood cancer programs.   It’s a big number – but what’s really amazing is that we know of several kids who are alive today because of research programs this ride has funded – you know that every dollar and every pedal stroke makes a meaningful difference.

Did you ever have a close call with a vehicle, while cycling?

Yes – I’ve had a few unfortunately

What can a driver of a vehicle do when they see a cyclist? Here is our interview with Wayne Arrowsmith! Thank You

What is the most memorable experience you had while cycling?

It’s difficult to zero in on one memorable experience that I’ve had while cycling. I have toured all over Atlantic Canada, the Eastern and Western US  and could tell you many stories most of which involve meeting people from a variety of backgrounds. It’s the beauty of cycling, the ability to interact with other people while feeling the wind blow you along!

If I have to pick one it would be from August of 1995 when I met my future wife at a bike rally in Tatamagouche,  Nova Scotia.  I we rode together for three days and at the end of each day’s ride, we were both exhausted and would sit down and devour popsicles which the rally organizer had provided for riders.

Wayne has been a tireless worker in the area of bike safety.  His world was forever changed  in December of 2016 as the cycling community across Canada was stunned by the tragic loss of Ellen Waters who passed away due to injuries sustained when struck by a vehicle from behind during a training ride near her home in Sussex.  Her tragic death unleashed an outpouring of sympathy from popular riders and renewed the push for stronger laws to protect cyclist?

The cycling community has been advocating for improved cycling legislation for about three and a half years. To date our efforts have resulted in EllensLaw and a draft set of recommendations to improve cycling safety issued in July, 2018 that have not been acted upon.

Ontario was the first province to enact a one meter law (passing distance between motorist and cyclist) in 2015! What year was the one metre law passed in New Brunswick?  What about Nova Scotia, Prince Edward Island and Newfoundland and Labrador, do they have a one meter law?

The New Brunswick one metre law commonly referred to as EllensLaw was passed in June 2017. This was a single amendment to the MVA. Other provinces in Atlantic Canada have made significant amendments to their MVA’s to provide greater protection to cyclists and pedestrians while cycling or walking.
Nova Scotia June, 2011. Additionally Nova Scotia replaced its MVA with the Traffic Safety Act which recognizes roadways as shared spaces for all users including pedestrians, first responders, cyclists etc.
PEI May 2017
Newfoundland and Labrador March 2019, Newfoundland and Labrador also provide a 1.5 metre distance for speeds over 60 kph.

What are the safety rules for riding a bike?

This is not a comprehensive list by any means. I would refer you Sections 176 to 181.1 of the NB Motor Vehicle Act for a complete list of laws for cyclists.

Why is bicycle safety so important?

To fully enjoy cycling, safety is paramount. If cyclists don’t follow basic safety rules and laws, then they are increasing the risk of an accident happening which can result in bruises, cuts, or more serious injuries requiring hospital visits.

What is the most important piece of advice you can give to a new cyclist?
BE SEEN. Wear bright colored clothing and be visible.
SEE. Make eye contact with other cyclists, pedestrians and motorists.
BE PREDICTABLE. Ride in a straight line, obey stop signs as well as all other laws designed to protect you, other cyclists, and pedestrians.